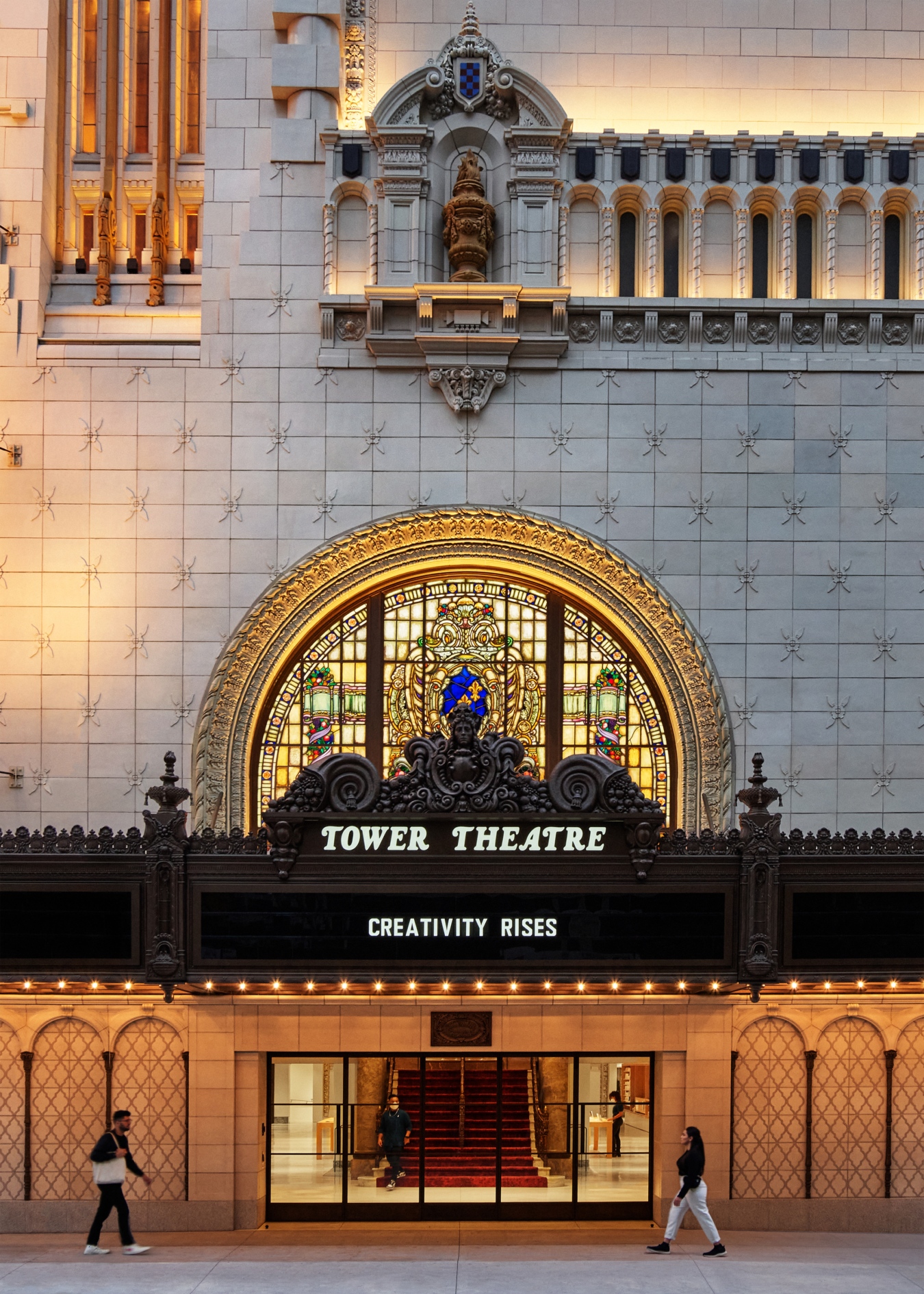 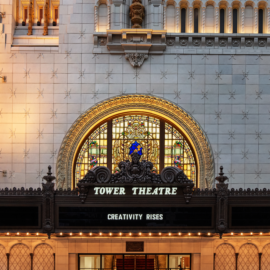 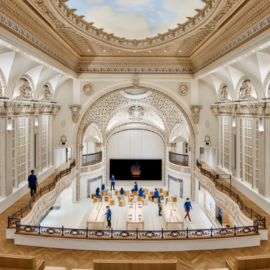 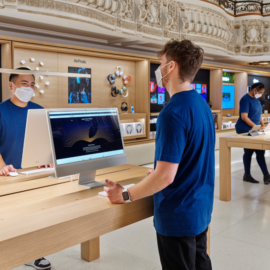 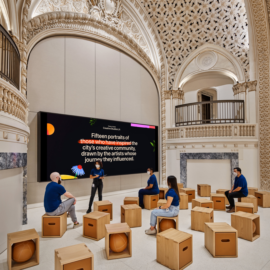 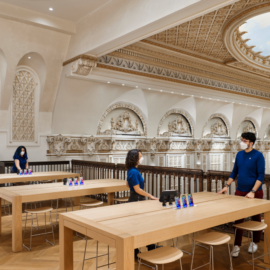 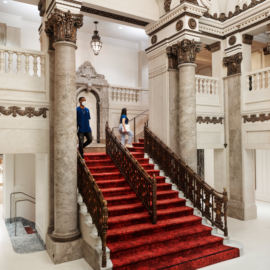 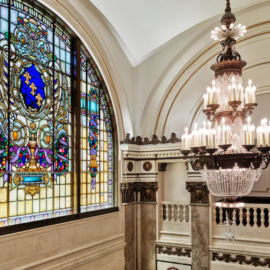 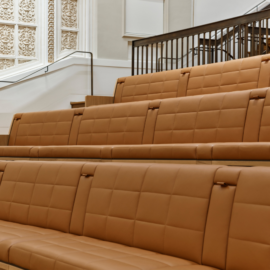 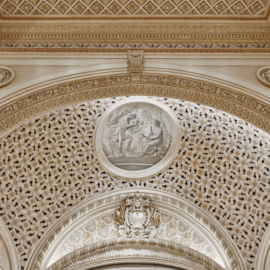 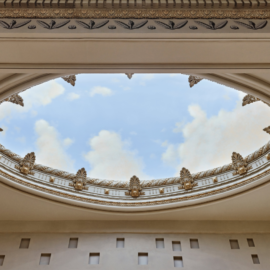 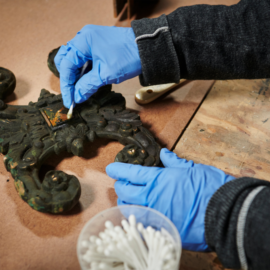 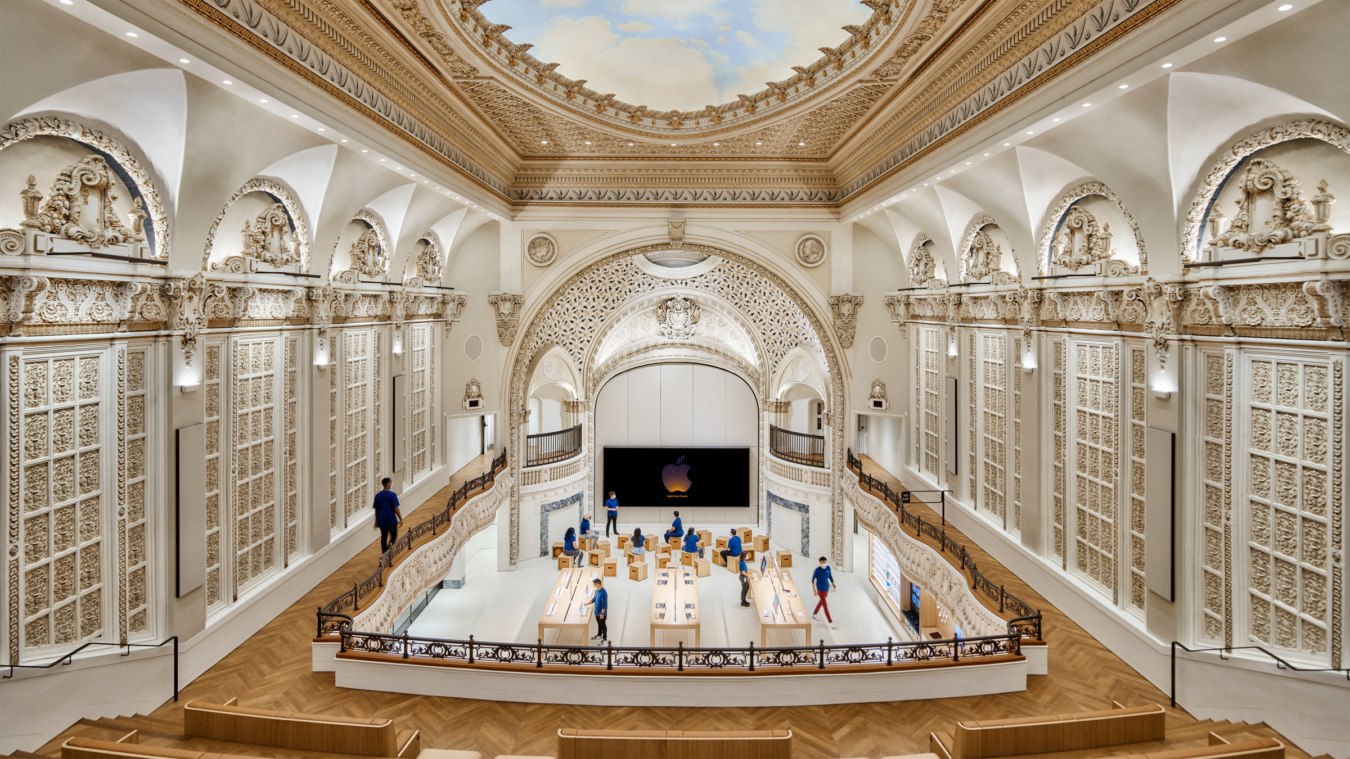 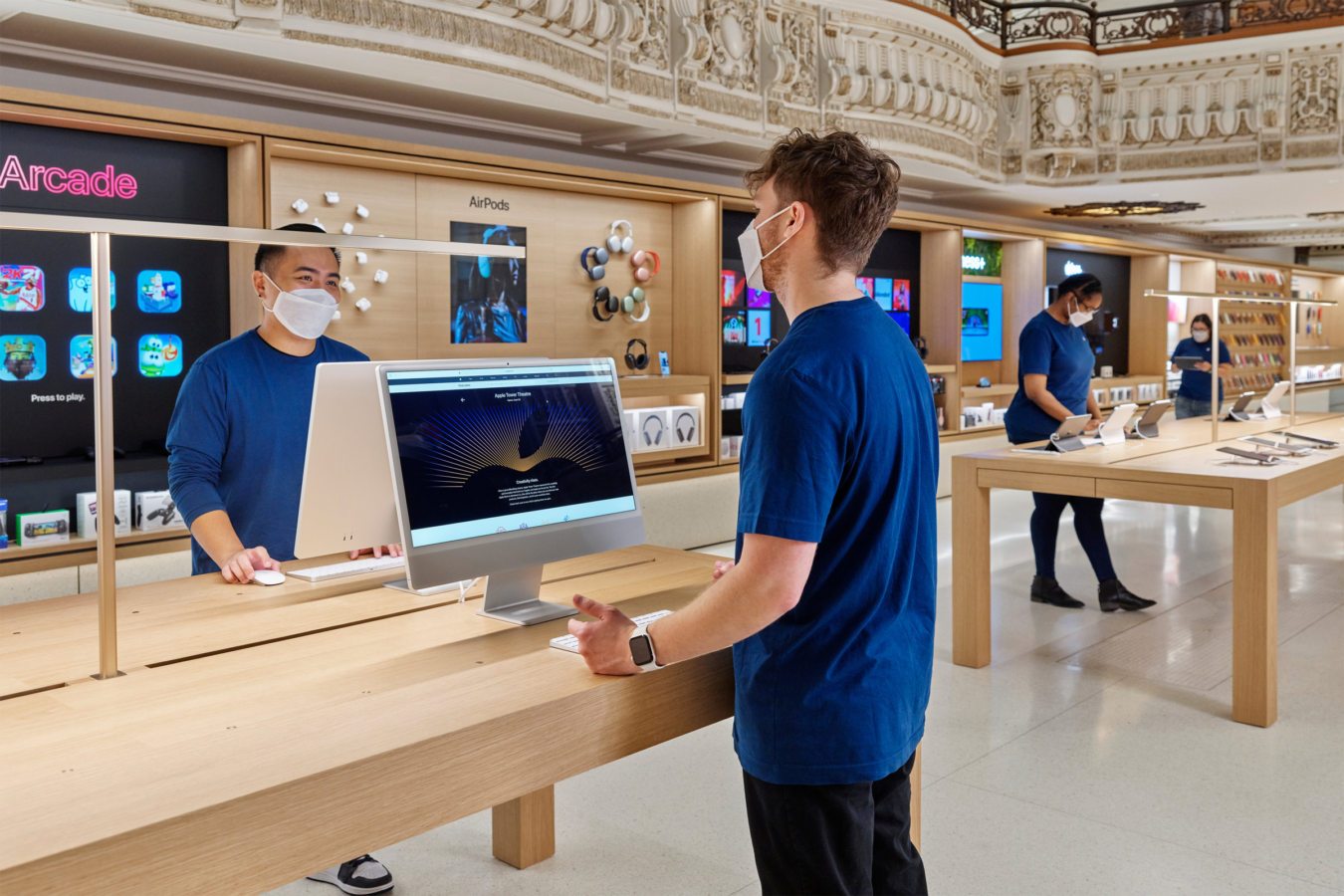 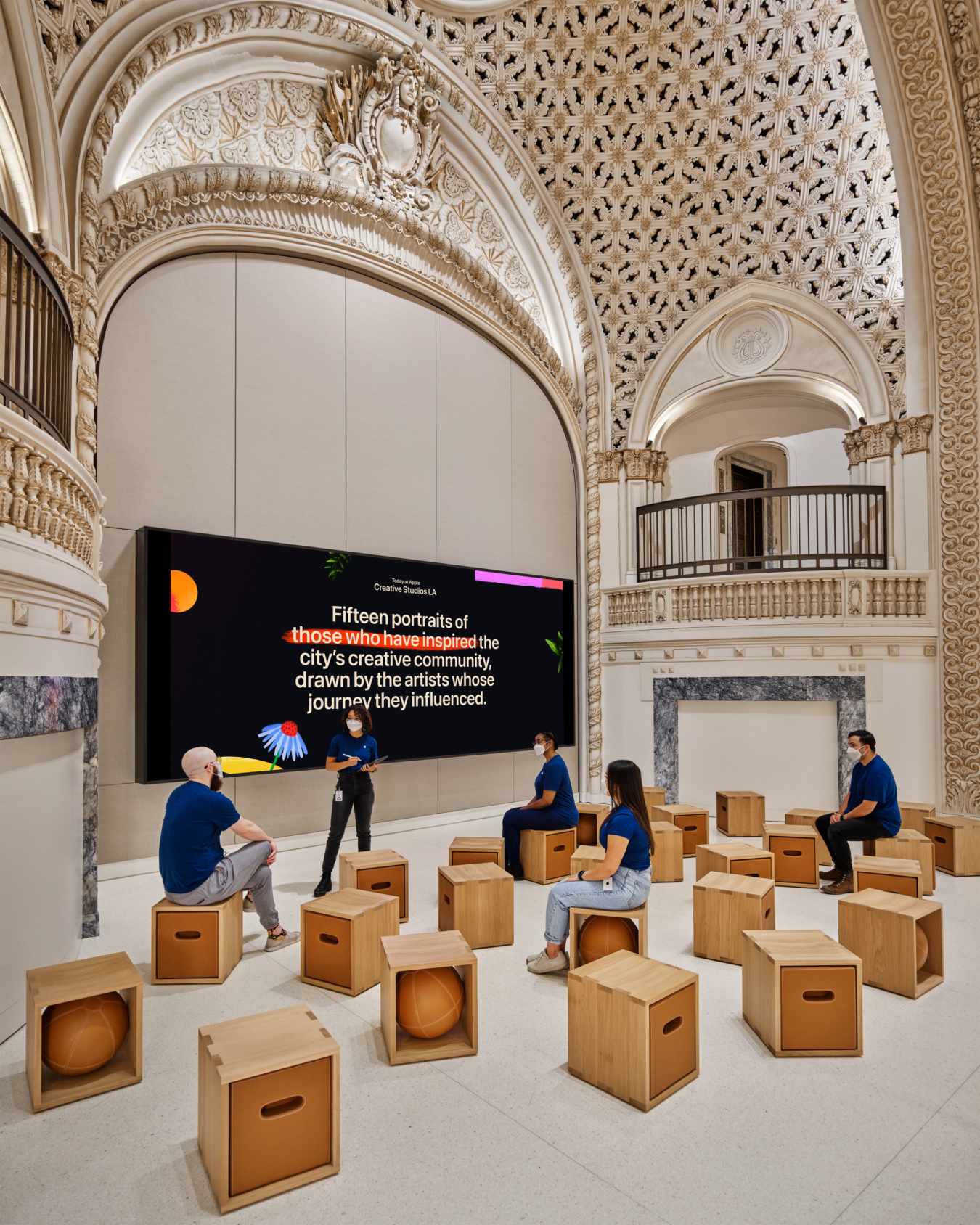 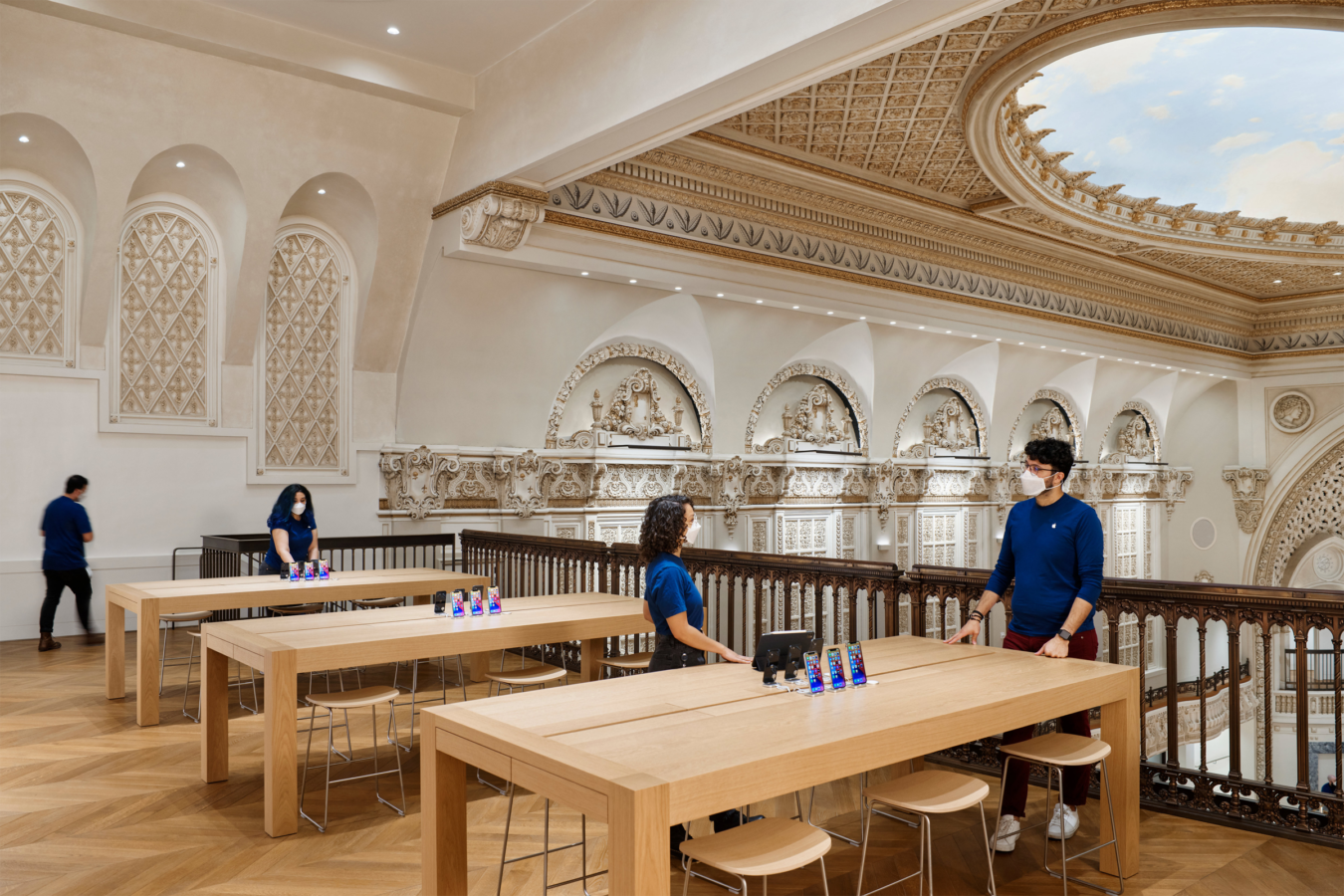 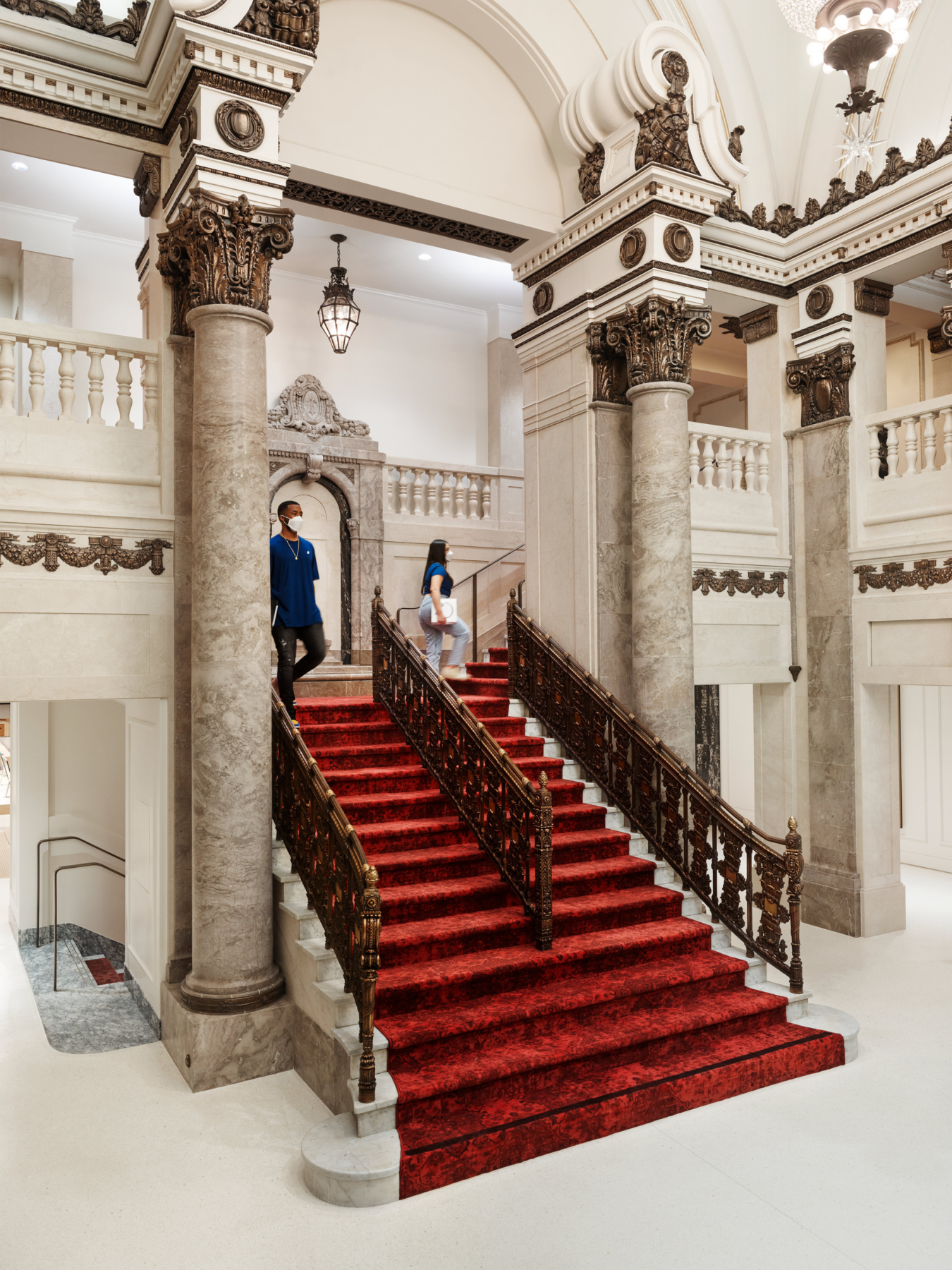 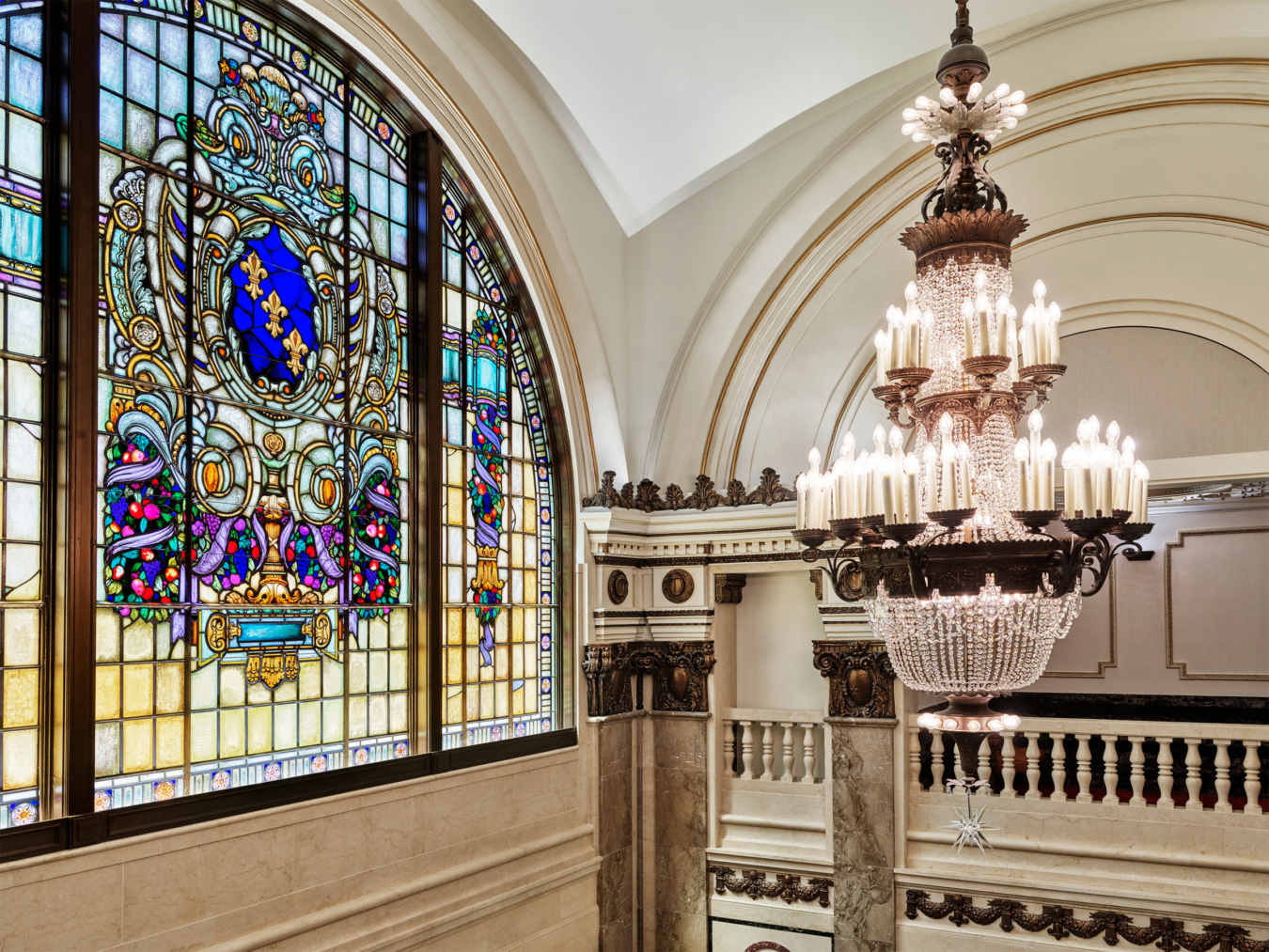 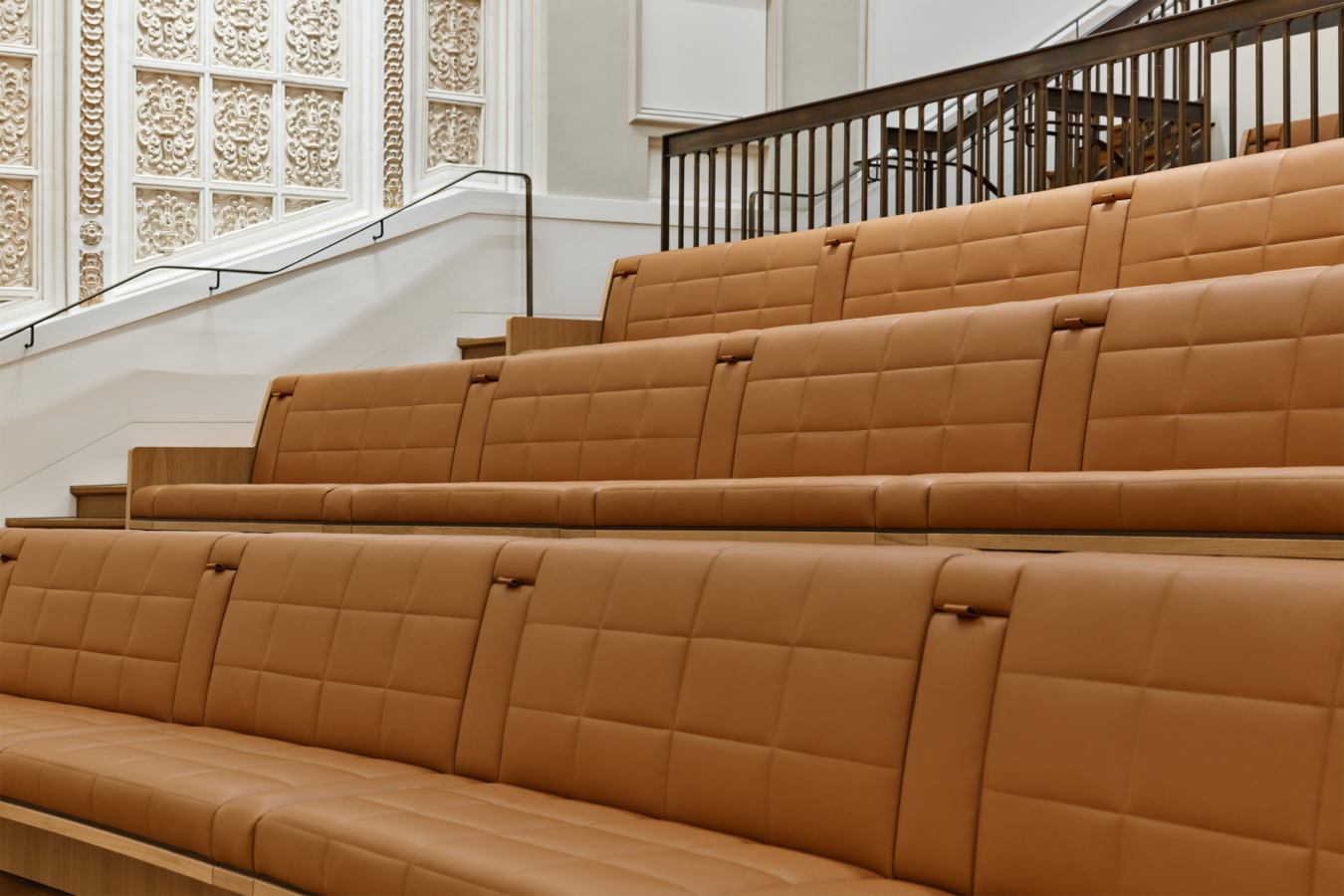 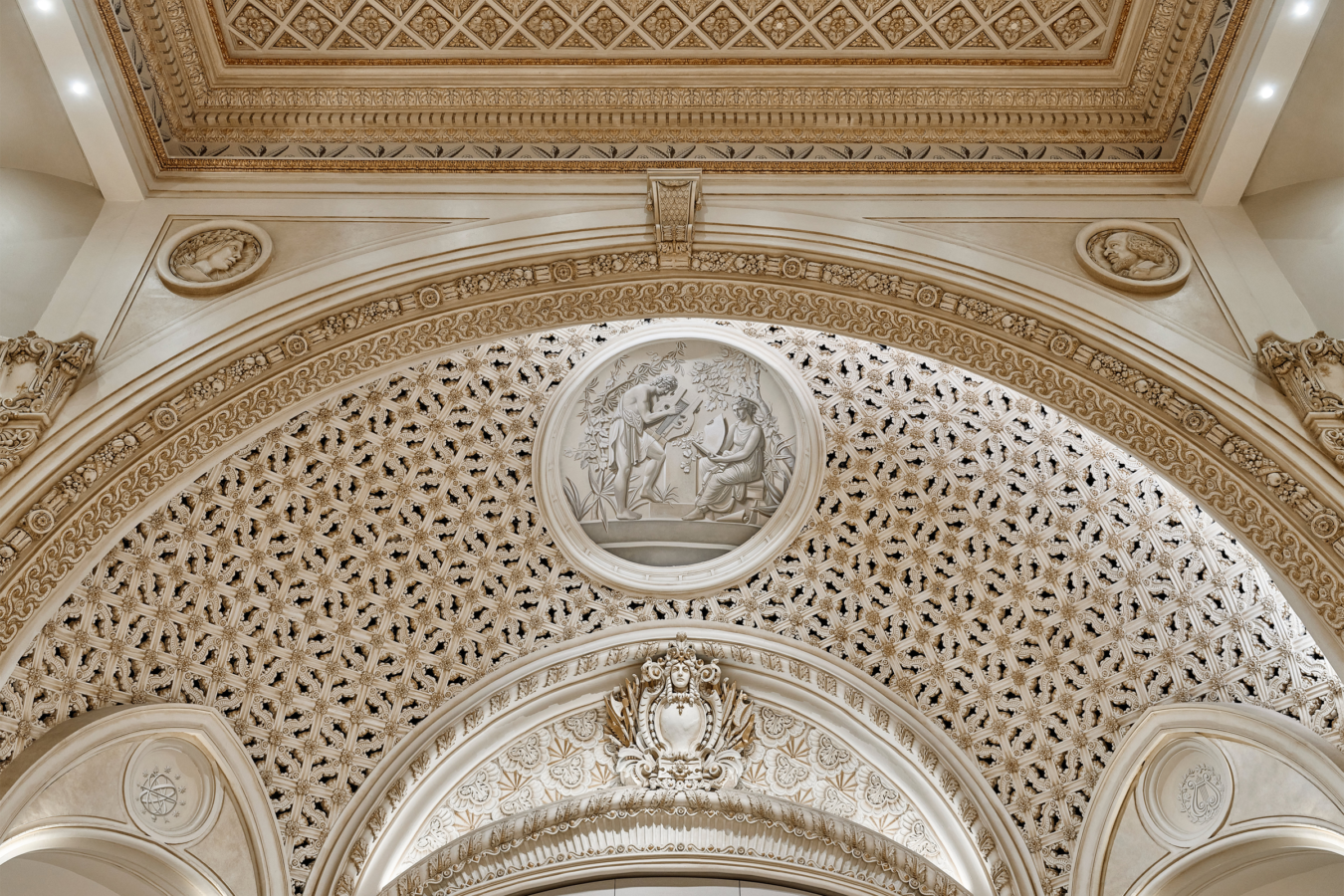 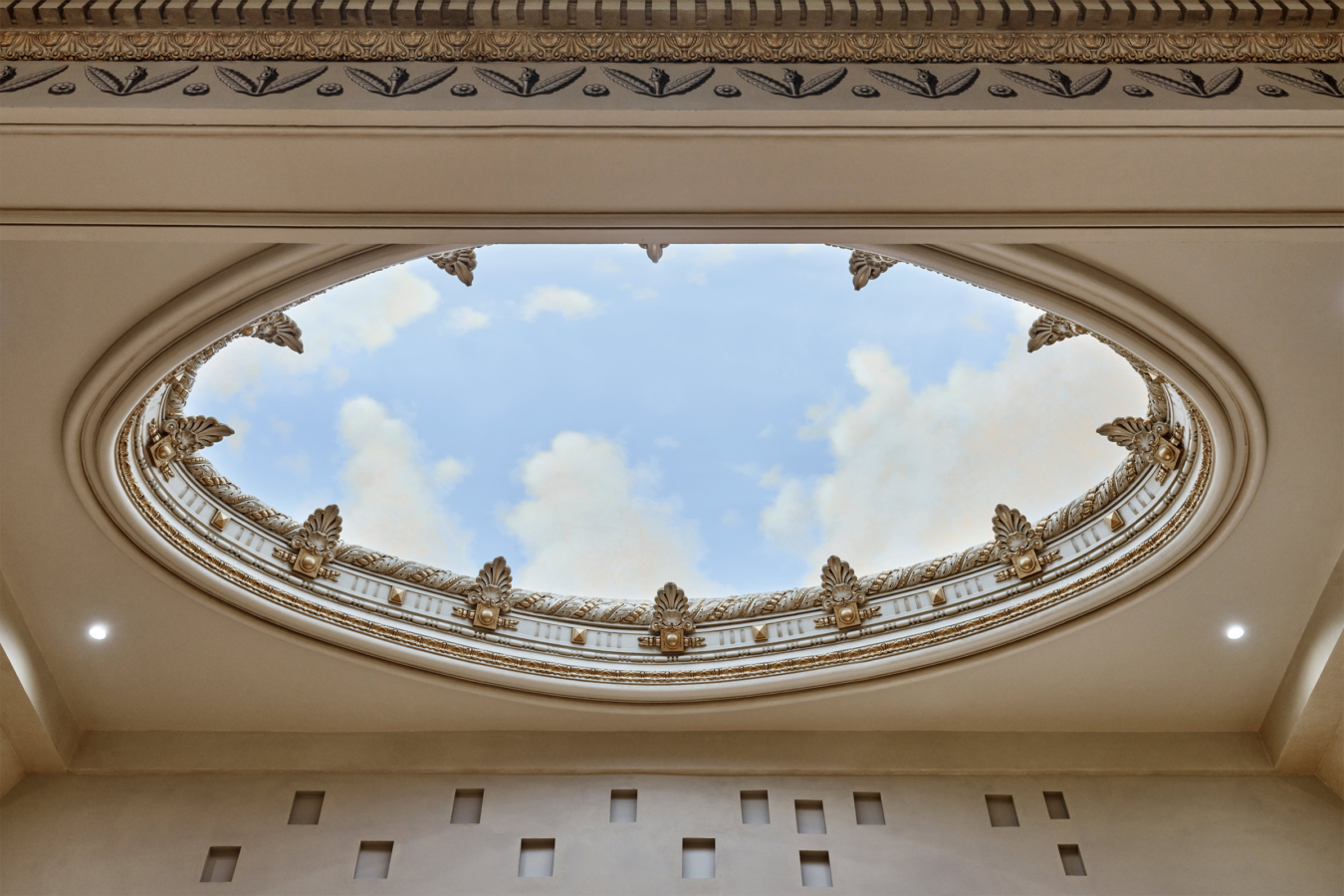 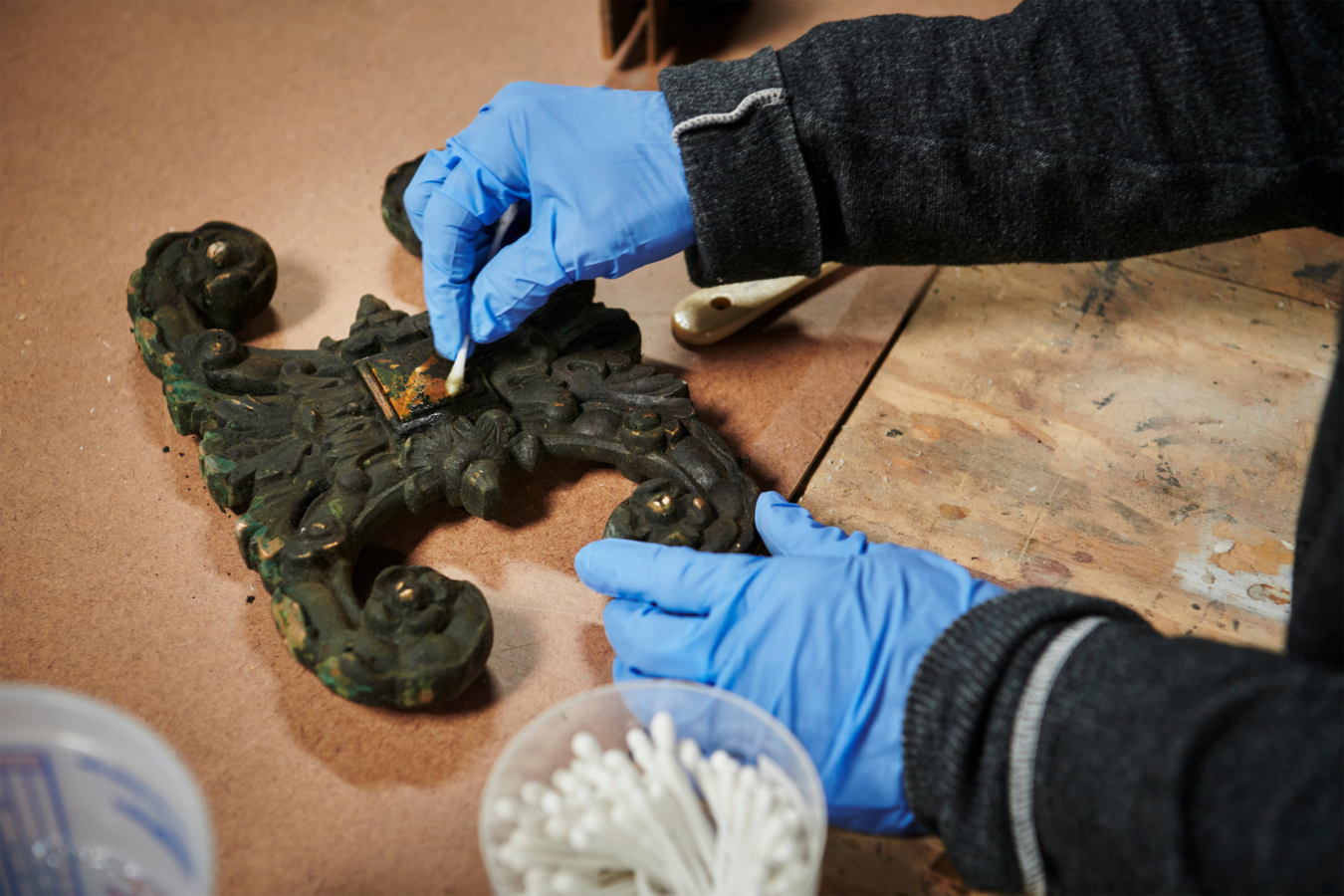 Apple and architecture aficionados are in for a real treat the next time they pick up some AirPods or a new MacBook at the tech giant's newest Los Angeles store. Company CEO Tim Cook and Grammy-winning musician/producer Finneas (a.k.a. Billie Eilish's big bro) were among those who celebrated Apple Tower Theatre's grand opening Thursday, June 24 in Downtown alongside hundreds of fans who lined up at the store, per Variety.

Located at the buzzing corner of Broadway and 8th (next door to Vans and steps away from Urban Outfitters and Paul Smith), the Renaissance Revival space spans approximately 14,858 square feet across the main level, where Apple's retail area is located; the modern mezzanine, where shoppers and architecture fans can rest their feet; and a basement level, where a gallery reveals the renovation process alongside relics discovered during the project.

The stunning 900-seat theatre was commissioned by H.L. Gumbiner and was designed by renowned theatre architect S. Frank Lee, according to the Los Angeles Conservancy, which worked closely with British architectural firm Foster + Partners and Apple to review the restoration plans of the adaptive reuse project. Boasting French, Italian, Moorish, and Spanish design elements in terra cotta, the historic landmark debuted in 1927 and was originally inspired by the Paris Opera House (as evidenced by the majestic red-carpeted entry staircase). Per the nonprofit restoration organization, the theatre was the first in L.A. to be wired for talkies.

During the virtual store preview, Apple retail design team director Doo Ho Lee also revealed that the company rebuilt the theatre's clock tower cap based on historic photos of the original stone design, which was damaged during the 1971 San Fernando earthquake.

"Los Angeles is a city that's bursting with creativity and we thought it was really important to infuse that energy [into the store]," Apple global events head Ashley Middleton explained in a virtual preview during opening week. That's why the Bay Area-based company tapped 15 local creatives and equipped them with iPad Pros and Apple Pencils to draft murals inspired by their mentors.

The artists then painted directly onto the building's exterior, and features portraits of local creatives including Her Studio founder and In The Visible producer Lucia Tran by painted by Carolyn Suzuki, MCLC designer Jacqueline Velasquez by artist Steve Martinez, poet Faith Santilla by Bodeck Luna Hernandez, among many others.

The store also houses Apple Creative Studios L.A., which is hosting a regular schedule events through July 22. Check out the full lineup events here, scroll through the gallery above for more photos of the dreamy landmark-turned-Apple store, and see below for the address and hours.

0
Danielle Directo-Meston July 6, 2021
ADVERTISEMENT
GET OUR NEWSLETTER
MOST READ THIS WEEK